I’ve featured Derry City before on Thursday Doors but most of the photographs posted were taken during the daytime. These were taken on an evening stroll along the waterfront. If you look closely at this first one, you’ll see a red door in the distance. I like how this image shows a glimpse of the older properties through that gap in the newer architecture.

There are lots of interesting sculptures in the city, like these created by young people from materials found polluting the local beaches and rivers. Sorry for the water mark on photos, I forgot to turn it off before I took them. 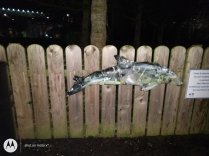 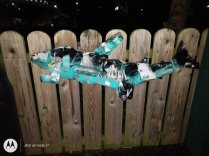 The following poster has an interesting story behind it. At the height of the second world war, Derry was home to thousands of US and British naval personnel, whose job it was to service the escort vessels protecting the Allied merchant ships on their dangerous crossings of the Atlantic. That story deserves a post all of its own so I’ll leave it till later in the year. Keep an eye out for it.

Speaking of eyes . . . . I came across this nice piece of street art near the end of my walk. The Peace Bridge is reflected in the eye but I couldn’t pick it up clearly in the photograph.

I’ll have a few more sculptures and a smattering of local history in my next Derry City post. Thanks for stopping by, Norm has a great selection of Thursday Doors over on his blog this week.

Author of 'A Pocket Full of Shells' an Amazon International best seller, Jean writes young adult and historical fiction. She has been known to shed a tear over Little House on the Prairie.
View all posts by Jean Reinhardt →
This entry was posted in Art, environment, Ireland, The Good Things in Life, Thursday Doors, Travel and tagged DerryCity, IrelandTravel, sculpture, ThursdayDoors, WW2. Bookmark the permalink.