If you’ve been following my blog over the last couple of weeks, you can guess where this Thursday Doors post is coming from. Enniskillen, of course, and red doors to start with.

I’ve been saving these particular photos for this week’s post as they have a relevance to Remembrance Day, commemorated annually to mark Armistice Day which ended the First World War at 11am on the 11th day in the 11th month of 1918. This year is extra special, being the centenary of such a significant day in history but for the town of Enniskillen there is another tragic event forever linked to Remembrance Day.

On Remembrance Sunday in 1987, crowds made their way to the memorial in the centre of Enniskillen to pay their respects to the war dead. At 10.43am, a bomb exploded killing eleven and wounding 68. I remember how sickened I was by it at the time but I won’t go into the politics of it here. If you would like to read up on this tragic event I’ve put a link at the end of this post. I felt it appropriate to use a black and white image of the photo I took of this poignant memorial, which commemorates the residents of Enniskillen who were killed or missing in World War I and World War II. There are also eleven doves on the memorial, in remembrance of the victims of the bombing during the ceremony on Remembrance Sunday, on 8 November 1987.

My friend and I sat for a while in this little park and found a cairn which had been built by young people of the town as a symbol of unity and solidarity. On a surprise visit to Enniskillen, Princess Diana laid the last stone on the Peace Cairn. 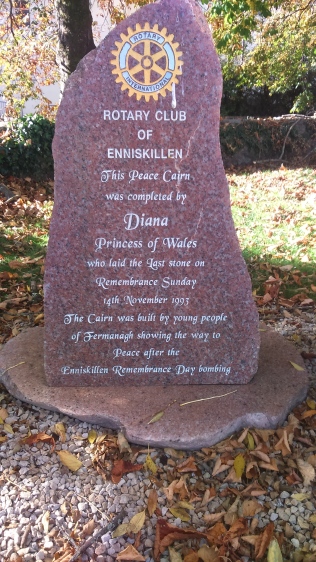 Connected to the park is the East Bridge with its lovely old arches. 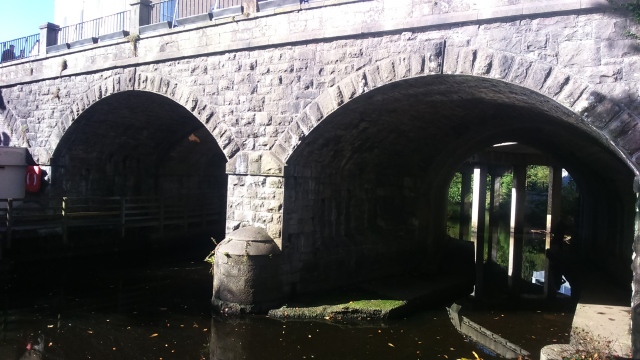 I’ll leave you with a view of the blue skies and golden foliage that bade us farewell as we left town on a beautiful autumn day. Next week will be my last post from Enniskillen, for a while at least – there is still a castle and museum to explore. 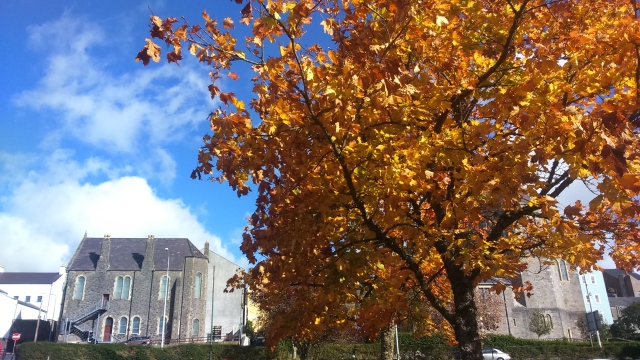 Thanks so much for taking a trip around this lovely town with me. If you would like to see some more Thursday Doors from various parts of the world, have a look at Norm’s blog where you’ll find a ‘blue frog’ link that will take you to them.

Author of 'A Pocket Full of Shells' an Amazon International best seller, Jean writes young adult and historical fiction. She has been known to shed a tear over Little House on the Prairie.
View all posts by Jean Reinhardt →
This entry was posted in History, Ireland, social issues, Thursday Doors, Travel and tagged ArmisticeDayCentenary2018, Enniskillen, PrincessDianaPeaceCairn, RemembranceDayNovember11, ThursdayDoors, WarMemorialEnniskillen. Bookmark the permalink.