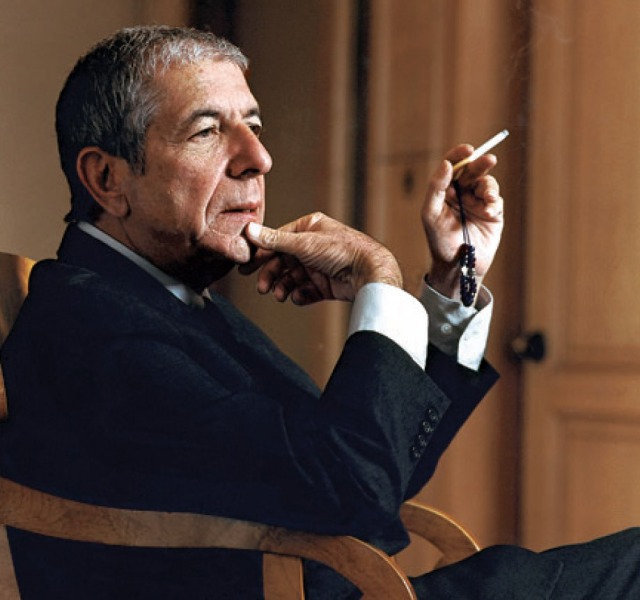 I have known Leonard Cohen’s music and poetry for over forty years, from my teens right into my fifties. I never did get to see him perform live at any of the venues he played on his visits to Ireland but last year made a promise to myself, should he play here again I would be there. That’s not going to happen now but his music and lyrics will always be with me.

On September 11 and 12, 2013, at the O2 music venue in Dublin, Leonard Cohen ran onto the stage with more energy than your average 79 year old, performing some of his best numbers, from Dance Me to the End of Love to Closing Time, for almost four hours each night. Accompanied by the Webb sisters, who also played guitar and harp, the gravelly voice of Leonard Cohen was as good as ever.

The man whose lyrics are soul searching was first recorded reading eight of his poems in 1957 by Folkways Records, when they produced the album, Six Montreal Poets. He used to say that he turned to music because he knew he couldn’t make a living as a poet. More than 50 movies list Cohen’s music on their soundtracks, with the song Bird on the Wire, being played in the film of the same name, starring Mel Gibson and Goldie Hawn. Thousands of cover versions have been made of his songs.

In his book, Flowers for Hitler, published in 1964, Leonard Cohen’s poetry changed from his early romantic style to the typical, bitter-sweet writing we see in many of his lyrics today. He was deeply affected by the Holocaust and this was a big influence on the direction he took with his poetry. His novel, Beautiful Losers, published in 1966, is full of Leonard Cohen’s obsessions along with his uncanny sense of the absurd. History, politics, religion and sex, feature in this work of radical fiction. It’s a book full of loss and the dynamics of relationships.

Leonard was a man of great integrity. For instance, during his UK and North American tours in the early years of the 70’s, Cohen and his band performed in various mental hospitals. These were private concerts for the patients and were never used for self-promotion.

Marianne Ihlen, the inspiration behind ‘So Long Marianne‘ and ‘Bird on the Wire‘ received a very prophetic letter from Leonard Cohen on her deathbed a little over three months ago. In it he said; ‘Well, Marianne, it’s come to this time when we are really so old and our bodies are falling apart and I think I will follow you very soon. Know that I am so close behind you that if you stretch out your hand, I think you can reach mine. . . . . . . But now, I just want to wish you a very good journey.’

A favourite song on his tours, Dance Me to the End of Love, originally released in 1984, was partly influenced by the Nazi death camps, where musicians were forced to play in string quartets while their fellow prisoners were being annihilated. The reason I chose this song to include in this post is because it is not just about death, but love and life and companionship. I’ve been with my husband for as long as I’ve known Leonard Cohen’s music and now that we are heading into our retirement years, the words and lyrics mean so much more to me than they did thirty years ago. I think this is the original Sony video released with the song in 1984. It brought tears to my eyes today.

Rest in peace, Mr. Cohen, you will live on in our hearts.

Author of 'A Pocket Full of Shells' an Amazon International best seller, Jean writes young adult and historical fiction. She has been known to shed a tear over Little House on the Prairie.
View all posts by Jean Reinhardt →
This entry was posted in Music, Poets and tagged Leonard Cohen, Musician, Poet, RIP Leonard Cohen. Bookmark the permalink.